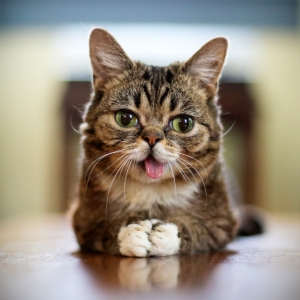 Given the worldwide popularity of Internet cat videos, it seemed likely that the public and news media would be receptive of this research — finding it as irresistible at catnip.

After the release went out on June 16, the News and Media Team responded to numerous media requests from around the world for the paper and interviews with Myrick. It also pushed the study out on social media and helped fuel it going viral online.

In response to all of the interest in the study, TheConversation.com asked if Myrick would write an article about the value of the research and why she chose to do it. She wrote the article, “Study shows the paw-sitive effects of watching cat videos.” Her article subsequently was picked up by the popular sites Slate, Mashable, Digg, Quartz and Fortune Magazine.

Professor Myrick has been interviewed extensively on radio and TV stations and networks, including National Public Radio (see below), Los Angeles radio station KABC-AM, Canadian Broadcasting Corp. radio (numerous times), RTE Radio in Ireland and stations in Australia. She has spoken to the New York Times and featured on HuffPost Live.

Laboratory Equipment magazine selected Myrick as its “Scientist of the Week” and did a Q&A with her.

It even became fodder for a classic cartoon, Ziggy.

Professor Myrick even received a congratulatory email from “Disco the Parakeet,” the “smooth-talking budgie from ‘Pets – Wild at Heart’ on BBC One.” George Takei of “Star Trek” fame, who has 1.66 million followers on Twitter, tweeted about the study. Satire site The Onion parodied the study.